Wow, the last week has been such a whirlwind!! We are overjoyed to announce the birth of our daughter Zelie-Louise Layla Rose, who was born on April 6, and entrusted to us by her birthparents on April 10. Welcome to the outside world, Zelie, and to our family! 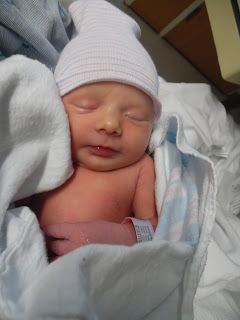 There is so much to say about the last few days....and we are operating on significantly less sleep than usual, so this will probably be short-ish, with more posts later. Here are some thoughts for now:

We were able to meet Zelie's birthmother and several members of her birth family prior to birth, which was really special. We ended up staying in the hospital on Thursday and Friday night, sharing a room with Zelie and her birthmother. That was a really precious time for us, and we hope that we were supportive to Zelie's birthmom too.

About her name: Zelie is pronounced like "Kelly" but with a Z. Zelie-Louise comes from two French saints, St. Zelie and St. Louis Martin, who were canonized in 2015 (we were there in Rome for the canonization!). They were a holy married couple. Google them if they're unfamiliar. One of their daughters is more well-known: St. Therese of Lisieux. Louise is also special because of our friend Louise who passed away in March. Layla Rose is a gift to Zelie from her birthparents, who chose that name for her. Rose is a family name for us too (Dan's paternal grandma was Rosina so we were happy to name her after his Grandma as well), and as a few friends have pointed out, St. Therese is associated with roses, so it all fits together! As we have been saying: it's a long name packed with a lot of love.

About Zelie: she is a delightful baby! Praise God, she is fairly healthy. She only had to stay in the hospital until Saturday and then was discharged at the same time as her birthmom. She is eating great, sleeping like a normal baby (she prefers to sleep in our arms but does okay in her pack and play too), she makes all kinds of cute noises and faces, and is just a pure joy. We love being parents for her! They also say "sleep when the baby sleeps," but it's hard when the baby is just so cute and you want to stare in wonder at her!!

About her birth: that really is her birthmom's story so we won't go into detail. One special thing to note is that her birthmom asked Bethany to be in the delivery room, which was such an incredible honor, and Bethany was able to cut the umbilical cord. We were impressed at what a strong and nice woman her birthmom is, and we have enjoyed so much the opportunity to get to know her while we're in California.

That's about it for now - more later! We'll leave you with a few more pics of Zelie :)