Our Time in California Part I

Here's a bit of a run-down about what our time in California was like. There is just so much to say, so many grace-filled moments, challenging moments, exhausting moments...we feel like we've crammed months of life into three weeks!

Tuesday April 4: We woke up early and Dan's mom (who house-sat for us while we were gone) drove us to the airport. The car was packed with stuff! A suitcase each for me, Dan, and baby; a pack and play; a backpack, roller bag, car seat and stroller. Getting through security was crazy - our stuff took up the whole conveyor belt! Thankfully the people around us were patient, but wondered where the baby was! We told them we were adopting and people were very kind. Once we got through the line, we had over an hour before our flight, so a chance to catch our breath, and get some coffee and breakfast. We were able to gate-check the stroller and car seat to our final stop, so it was nice to be down to only a backpack and roller bag for the flight.


The flight to Oakland was quite long but smooth. We dozed, read a bit, and looked out the window. The descent into Oakland was really neat because we circled close to San Francisco and could even see the Golden Gate Bridge! In the airport we had about 40 minutes to hustle to our gate, buy some Chinese food for lunch, and board again.

We landed safely in Ontario (east of LA) and all our luggage arrived, yay! We were met at the airport by a friend's dad and mom, who were kindly lending us their extra mini van. (Unfortunately, we had to get a rental car a few days later because our car seat didn't work in the van...but it was really sweet of them and saved us some money!) We drove to our rental (airbnb) in Riverside, pinching ourselves that were were finally in California!

Jet lag really set in that evening...we went to a nearby grocery store and were just barely able to get some essentials before going to the apartment and crashing.

Wednesday April 5: We slept in (as much as you can when you're on Eastern time still...) and got bagel sandwiches at the ironically named East Coast Bagel. Then we ran some errands and drove to the hospital to check it out. It was an easy 20-minute drive and the scenery was really striking. Lots of hills in the distance (including some with snow on them), palm trees, long vistas - it seemed like something out of Jurassic Park or Lord of the Rings.


At the hospital, we found the maternity ward and introduced ourselves to the head nurse. She showed us the waiting room and said to announce ourselves when we arrived tomorrow. It was surreal being in the place where the baby would be born the next day! We were happy to see that the hospital was clean, the staff seemed friendly, and it was small, not nearly as loud and overwhelming as hospitals around DC.

We went out to eat before going to bed early in anticipation of our VERY BIG DAY tomorrow.

Thursday, April 6: We got up super duper early to get all of our stuff together and get to the hospital. We knew that Zelie's birthmom was asked to be there at 5 a.m. but the nurse said we didn't need to get there before 7:30....we got there around 6, haha - just too much anticipation!! To our pleasant surprise, Zelie's birithmom asked us to come back to her room right away to meet her. What a special moment that was! We were able to visit for quite a while before she had to get prepped for the c-section. We also met a few members of her family, which was special.

Around 9 or so, we went to get something to eat. The hospital actually hosts a farmer's markets on Thursday so we had some delicious fresh berries, a breakfast burrito and some pastries - yum. 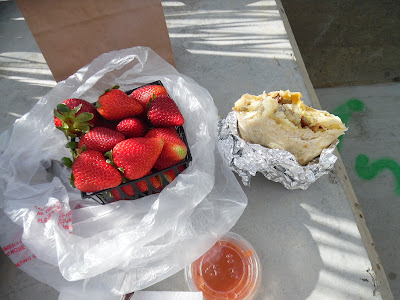 We went back to the waiting room, and another very pleasant surprise - Bethany was asked by Zelie's birthmom to be present for the delivery. So she suited up in the mask, head covering, robe, shoe covering, and was taken into the operating room. It's impossible to describe the incredible honor this was, both to be present to Zelie's birthmom during the c-section, and also to hear Zelie's first cries and see her in the very first minute of her life....we will be forever grateful for this memory. Bethany also got to cut Zelie's cord after she was born and hold her. Her birthmom was still on the operating table but got to give Zelie some special mama kisses.

Zelie then went to the recovery room to be weighed, measured, etc. She got to spend some special time with her birthfather there, and a bit later Dan was able to meet her and to help give her the first bath as doctors checked her out. All of these moments were so rich and happening so fast, it was impossible to take it all in - we just tried to receive each moment as a gift as it came.

A bit later, Zelie and her birthmom were taken to a postpartum room, where we joined them. When her birthmom was able to eat again, we asked what she wanted to eat (knowing hospital food is bad!) so she requested sushi. Dan drove half way across town to get the finest sushi :-) . Later that evening, we were invited by her birthmom to stay in the hospital room overnight - what a privilege that was. So we went back to our rental to get pajamas, etc., and then returned to the hospital. It was a big double room and we each had a single pull-out bed on one half. We loved spending time bonding with Zelie and feeding and changing her. It was such a joy to spend all of these moments with Zelie and her birthmother.

Friday, April 7: We spent all day at the hospital with Zelie and her birthmom, other than going back to the rental to shower and going out for food. What a special time this was, and always will be for us and for Zelie. We had lots of time just to talk with Zelie's birthmom and get to know her more, and also to appreciate all the little things about Zelie. Of course nurses and doctors were in and out pretty regularly, so it wasn't completely restful, but it was a wonderful experience.


A funny story: in the middle of the night, Dan got up to quiet Zelie and change her diaper. Knowing that she generally screams during diaper changes, he decided to push her cart into the hall so as not to wake the ladies. Well, that is a no-no....as soon as he got in the hall, a voice came over the loudspeaker: "Sir, please put the baby back in the room." Oops, the baby had an alarm on her leg which he set off!! He insisted he wasn't trying to steal the baby, just change her quietly! Lesson learned, he changed the diapers in the room from there on out.

Saturday, April 8: The day was similar to Friday, lots of time with Zelie and her birthmom, not a whole lot of sleep! In the morning, the doctors let us know that Zelie and her birthmom could be discharged today - yay! We were all ready to get outside, together - we'd been able to go out singly but of course someone needed to stay with Zelie, who could not leave the room (see above). Of course there was lots of paperwork to do before discharge (more so because of the adoption) so we didn't end up leaving until later in the afternoon. The birth father visited as well which was nice. But what a wonderful moment to leave the hospital! Zelie had her first elevator ride, first breath of outside air, and first car ride all in quick succession.

We were honored to take her birthmom and birthfather to their homes, which gave us all a little more time together. We also got some photos printed on the way (Walmart) so Zelie's birthparents could have hard copies. Tonight was the first time we had Zelie on our own, which was very special. She slept like a normal baby! Up every few hours to eat, but generally easy to comfort.

We were able to spend some more time with Zelie's birthparents on Palm Sunday, which as always was very special.

A lot of this week was spent just getting used to having a sweet little baby in our care! Zelie had her first check-up on Monday morning and did great. She had dropped in weight a little, which is normal, and was very healthy, praise God!

On Monday at 5 p.m., Zelie's placement into our family became irrevocable. Her birthmother had chosen to waive the 30 day "revocation period" in California and entrust her to us early. We happened to be in the car at 5 p.m. and said a Rosary for Zelie's birthparents, knowing that this was likely a difficult time for them, despite their conviction in choosing adoption for their daughter.

Tuesday our friend Fr. Jon visited and gave Zelie her first blessing. Dan and Fr. Jon were college roommates and good friends, and Father is a priest in Los Angeles. What a blessing!

On Wednesday we ventured out to a vineyard with Bethany's brother Ben and his girlfriend Natalie, who live in Los Angeles. It was gorgeous weather! And very pleasant sitting in the shade, sipping wine and talking. A great way to pass the time. Zelie enjoyed meeting her first uncle.

On Friday we took Zelie to church for the first time, to the Good Friday liturgy. The church near our hotel, St. Martha's, turned out to be quite lovely with wonderful music. They had a full choir for the service and the church was packed! Zelie slept through the entire two-hour service.

On Saturday we went back to the vineyards, this time meeting up with local friends who had also recently adopted!

We went back to St. Martha's on Easter morning for Mass and it was even more crowded than on Good Friday. People were spilling out the back doors where we stood. After Zelie had a bottle and a diaper change, she again slept through the whole service. It was her first Mass! After church, we visited with Zelie's birthmom for the afternoon and did a fun Easter photo shoot with Zelie - bunny ears and all! Here are some cute pictures from the day.

We are so blessed by Zelie, the joy is overwhelming! We feel very surrounded by God's grace. More to come later about our time in California and our travel back to Maryland!!

Please continue to keep us, Zelie, and her courageous birthparents in your prayers!
Posted by Bethany at 8:44 PM