It's about time for a new post! During the time of waiting for an adoption match, and specifically preparing to welcome home our daughter, we posted fairly regularly because it felt like so much was happening that we wanted to remember and share. Now that Zelie has been with us over six months (!!) we've settled into a nice day-to-day routine and haven't felt as inclined to write in this space. But it would be nice to catch up the story since where we left off, which was "Our Time in California Part 1".

Skipping to the main point: we made it home, all three of us :)

More specifically, we flew back from California earrrrrrly on April 24th. (Early as in, get up at 2:30 a.m. to get to the airport for our cross-country flight.) Zelie did so, so well on the plane! She slept, then ate, then slept some more.

Oh my, was it a JOY to see our home state appear below us after descending through the clouds! We showed Zelie - this is Maryland! And it was oh so GREEN! California is beautiful, for sure, but we hadn't realized how much we missed the green, verdant, hydrated landscapes of our east coast home.

At the airport, both of our moms were there to greet us and to meet Zelie for the first time. We were all fairly jet-lagged and exhausted (Zelie the least since she had slept so well on the trip) but those moments were so precious, having Zelie's two grandmas meet this much prayed-for and hoped-for baby. 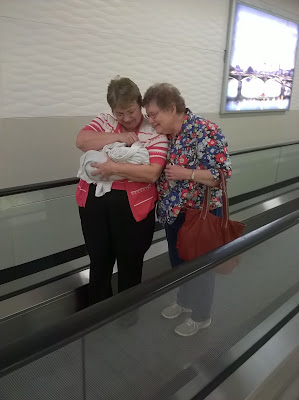 Much cuddling was done!

Upon arriving home, Zelie greeted us with to-date her BIGGEST diaper blow-out ever.....while we are scrambling to get more diapers, and wipes, and clean clothes, all on basically no sleep and a screaming baby! Definitely a memory. And thanks, baby, for saving that until we were off the plane!

The time after bringing a baby home (really, after parental revocation papers are signed) is called the post-placement period and (surprise!) there's quite a bit of paperwork, haha. Since we are finalizing in Zelie's birth state of California, we received a quite sizable packet of forms from the social worker who will be handling our case. We hunkered down and filled out all of those - quite a few that were similar to what we did in our home study, but they just needed their own copies.

We also had to have three post-placement visits with our local Maryland social worker, the same one who did all of our home study visits. She came for the first time the week we got home, again about two months later, and for the third and probably final time in September, when Zelie was 5 months old. ["Probably final" because there's a chance that California will ask for one more - that is pending.] Those visits were really special! Our social worker has known us from the beginning of our adoption journey, did one yearly update with us, and now got to meet our daughter. Pretty cool. She has been throughout such a wealth of knowledge about adoption and now about child development too, so it was great to be able to ask her questions and get her input on situations that we weren't sure how to deal with.

Another thing is that when Zelie had her pediatrician appointments, we had to fill out extra forms to send both to California and Maryland - just another check that the baby is doing well.

The whole post-placement period, before finalization happens, is all about making sure that the baby and parents are adjusting well to their new family structure, and of course (worst case scenario) to make sure there is no abuse or neglect going on. Sad to say, I'm sure it does happen and of course the baby shouldn't be in that environment. But there's not a question of whether Zelie will stay with us or not. The revocation of parental rights has happened already, and barring fraud, the adoption proceeds toward finalization. At finalization Zelie will be issued a new birth certificate with our last name on it, plus a social security number.

Per California rules, Zelie has to be with us for six months before the social worker writes her report. So now that that's happened, we are waiting for a copy of the report, which will also be sent to the CA courts. We're not entirely sure when it will all be finalized, but it would be really special if it happened before or around Christmas!

The other big thing in our lives lately is that Bethany is now a full-time stay-at-home mom. She ended her job of 7+ years on September 1st. It was a fairly emotional time, saying goodbye to wonderful coworkers and stopping a job that she enjoyed and put a lot of heart and effort into. But of course this has been our dream for so long, and it has been such a blessing to have her at home taking care of Zelie day in and day out! During the week she takes care of a friend's baby too, so the days are still full but in many different ways.

We did a bit of traveling over the summer with Zelie: to Orlando for a work trip, where Zelie went to the pool for the first time:


And we spent a wonderful week vacation with two close families, here at our house, a night at the beach, and in Virginia. So Zelie got to see the Atlantic Ocean! Not many 5 month olds can say they've been to both coasts already :) 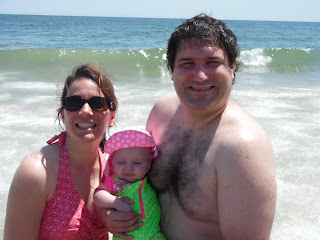 Other than that, Dan is proceeding with his dissertation. He finished his third chapter in September and has started work on his fourth and final chapter, so if all goes well he will graduate in the Spring, about a month after Zelie turns one!

It has been a complete joy to be Zelie's parents and we are grateful for every little moment. It has also been so beautiful to see how our friends, family, church and community have welcomed her with open arms. We detect some budding friendships already between Zelie and babies her age.... :) And it has felt really healing to get to experience so many firsts with Zelie, from first time grabbing a toy to first time rolling over to first time eating food and everything in between. Thank you, God!

We'll plan to note here on the blog when Zelie's adoption is finalized and other happenings!

Until then, a final adorable shot of our priceless little girl: 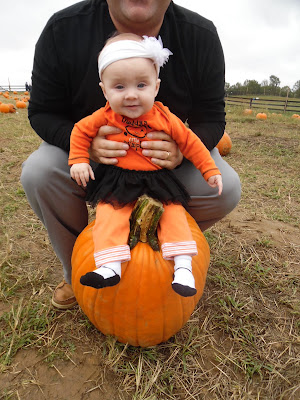